Each year the white water kayaking extreme race world champs are held in the small town of Oetz, Austria. Known as the Adidas sickline race, almost 150 competitors from 26 different countries flocked to Oetz to test themselves amongst the worlds best.
This is truly a wicked event. Most paddlers arrive a week early to catch up with friends, hang out and practice their lines down the Wellerbrucke rapids where the race is held. This is the world championships, but the seriousness of the event does not affect the atmosphere amongst the paddlers. The vibe is friendly and chilled out.


The Oetztallerache (Oetz river) is a glacial fed river which runs too high for most of the summer with the heat, but now in autumn the temps are much lower and therefore limit the melting of the glacier, allowing the wellerbrucke rapids to drop to a level which is paddle-able.
The water is cold, about 6 degrees Celsius, and the rapids only see the sun for a few hours of the day. Luckily for us the weather picture perfect every day, apparently it can be pretty cold down there if its not.
This year the event attracted the strongest field the sick-line race has ever seen, with so many incredible paddlers making the effort to get to Austria this year. It was also great to see such a diverse range of countries competing – not just Europe.
Over the week prior, many fast paddlers were emerging as favourites to take out the competition, with Egor Voskoboynikov of Russia and Isaac Levinson of the USA were both looking smooth and fast all week despite the higher than usual river flows. Because of a recent snow fall and then warm temperatures, the wellerbrucke rapids were quite juicy, and were proving challenging for most paddlers. Lets just say it was entertaining times before I was able to paddle again, whenever I was up at the race course watching paddlers lines. I’d say most paddlers at some stage had some time in a hole, or up side down, or under a rock during the week. 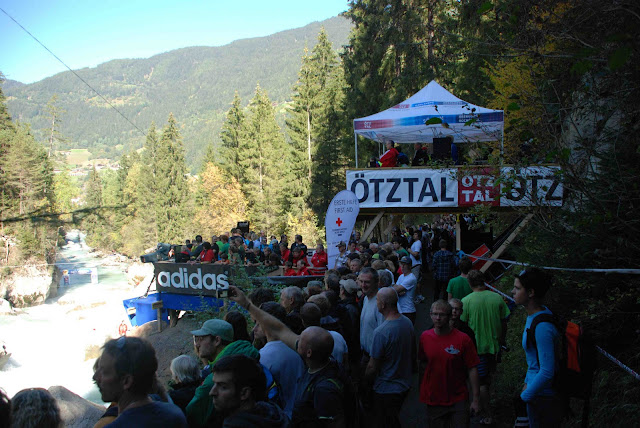 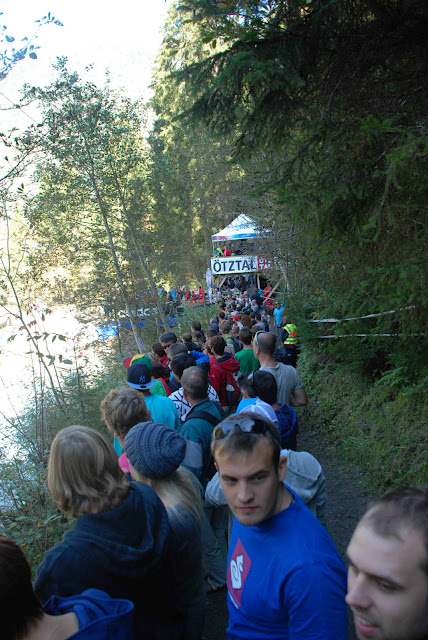 Day one of the event (Friday) was the qualification to make it through the finals on the Saturday. Qualification course was about an 80sec sprint the last two drops of the finals race course, and down a couple hundred metres of grade 3.
The first run cut the field down from 142 to 90, and the second run would then be combined with run no.1 and the field cut to 48 for the finals.
I felt pretty good in my first run, not fast but pretty smooth and no mistakes. Turns out it was little off the pace (62nd) and I needed to take a few seconds off that in my next run in order to qualify. My next run felt slower, it wasn’t smooth at all but I paddled way harder, and somehow I managed to be 2 secs faster than my first run. In the end it wasn’t enough and I had just missed the top 48 for the final, ending up in 56th place.  I was a little disappointed not make it through to the top 48, but couldn’t beat myself up too much considering my circumstances the previous 3 weeks leading up to the event. But actually all I needed was 2 of my second run, and then I would have been through.
The other three kiwis in the event qualified strongly, setting up an exciting day for NZ in the finals on Saturday.
Different from all other extreme races around the world, the finals of the sickline race start with the quarter finals in the format of a tennis draw – 1st races 48th, 2nd races 47th, 3rd races 46th and so on. Paddlers are matched head to head against their opponent on time, and the faster time progresses into the semi finals.
Mike Dawson, Sam Sutton and brother Jamie Sutton from New Zealand all dominated their opening encounters making into the semifinals.
24 paddlers then go forth into the semi finals along with 2 lucky losers (the fastest losers), again into a tennis draw system.
Unfortunately for New Zealand Sam and Jamie were drawn against each other in the semis, but it was a one sided battle with Sam posting a course record 56 seconds to oust Jamie from competition.
From the semis the top 15 go through to the super final where it’s a single run shoot-out, starting in reverse order.
It definitely makes it more exciting for the spectators having paddlers pitted against each other, but its not really appropriate for a world champs, as many fast paddlers that are fast enough to make finals are eliminated in earlier rounds.
The super final was amazing to watch with super-tight competition, and only a second separating 2nd to 8th position. We had 2 kiwis in the final and the suspense and excitement was amounting with every paddlers’ run down the course.
Mike Dawson put down a solid run and posted a 58.00 seconds time just edging into 1st place with only a few paddlers to come.
Sam Sutton was the last to have his final run and he absolutely destroyed the course, slashing a second off his previous course record and semifinal time, with a pretty-much perfect 55 second run, 2.15 seconds ahead of the next paddler.

It was an awesome day for New Zealand and also Bliss-stick kayaks, 1st and 2nd at the world champs. NZ’s Louise Jull also placed a creditable fourth in the women’s category.
It was such a sick week, so many good people and fun times and an awesome event, and then Oktoberfest to top it all off.  I’ll definitely be back for redemption in the race next year!
Below is the vid of the super final. Check it out. The last 20min has the kiwi's in action.
Posted by Brendan at 8:15 PM

Gear I love to use